Rina Green, the musical project of London-based Russian natives Alyona and Sasha Titov, takes its name from Rina Zelyonaya (ʻzelyonayaʼ stands for ʻgreenʼ in Russian), a Soviet actress and singer. The name is in dedication to an entire generation of actors who once enjoyed national fame in Soviet Russia but were forgotten in the turmoil of social and political changes at the turn of the century and died in extreme poverty. Heartbeat, the final track from the band’s upcoming album Universe 25, touches upon this topic with its lyrics: “I’ll be easily forgotten but that can’t hurt one/We’ll be easily forgotten but now it’s our turn to make your hearts beat.”

Sasha Titov, the bassist and co-producer of Rina Green, is not new to fame. In his native country Russia, he takes upon the status of a musical legend for his work with such bands as Aquarium and Kino, amongst others. Despite having moved to England almost two decades ago, Sasha has not been forgotten in Russia, where many believe him to be the most significant and original Russian bass player. In spite of this, his musical career hasn’t always been an easy ride. In the 80s Aquarium and Kino were blacklisted by the KGB; their concerts were considered illegal, and they often led to the arrest of musicians and the audience by the Soviet Militia.

In the mid-90s, Sasha formed a band with singer-songwriter Alyona, who now fronts Rina Green. The band quickly gained interest in Russia and were invited to play major festivals such as Generation ʼ95, which also featured renowned Russian artists such as Splean and Tequila Jazz. However, an incident that happened at the trendy Tam-Tam club in St Petersburg in autumn 1995 made Sasha and Alyona reconsider continuing their musical career in Russia. During the band’s performance, the club was attacked by a troop of militiamen; members of the audience who failed to escape were arrested and taken away in barred militia vehicles, and all the musicians were detained backstage for hours, interrogated and threatened to be arrested under a new law that allowed detention in prison for up to 6 months without charge. The incident was reported in a local newspaper and wasn’t the first of the kind. 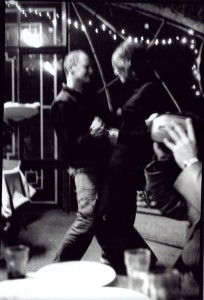 Soon after the incident, Alyona and Sasha moved to London and formed a band with British musicians, which they named Karmakoma after the Tricky/Massive Attack song of the same name. The band’s single Sleepwalker recorded at the Church Studios received positive feedback in the media, most significant of which was a review in Melody Maker magazine that described the title track as “an interesting arrangement of ethereal overlaid vocals and epic, yet laid back drums and guitar work”. The band quickly gained a following and was invited to play at the London Astoria and headline such venues as the London Garage. However, a sudden departure of the drummer in 1999 resulted in the band splitting.

In the following years, Alyona and Sasha toured and recorded with a variety of musicians, but all of the projects were short-lived. Sasha additionally played in several other bands, the most significant of which was the South-African punk outfit GJHustler, while Alyona signed a deal with a modelling agency in 2001.

In the late 2000s both Alyona and Sasha had sudden changes in their careers, with Alyona taking upon a PhD in linguistics at UCL and Sasha reuniting with his old Russian band Aquarium. It is during that time that the idea of Rina Green was born. In autumn 2013, Sasha and Alyona were joined by Liam Bradley (Van Morrison, Ronan Keating) on drums and Vinz Lamagna (Mysteries of the Revolution, Twisted Tongues) on guitars. The band started recording and by February 2014 their first EP Dreamers became available for streaming online. Despite having only four songs out, the band gained more than a thousand followers on Facebook within three months. The sudden public interest enabled Rina Green to open a crowdfunding campaign towards the recording of their debut album. The album that was mixed by the legendary Jerry Boys (The Beatles, Pink Floyd, The Shadows, The Rolling Stones, REM, Level 42, Everything but the Girl, Buena Vista Social Club) was given the name Universe 25 in reference to John Calhoun’s 1972 over-population experiment featuring an animal model of societal collapse. 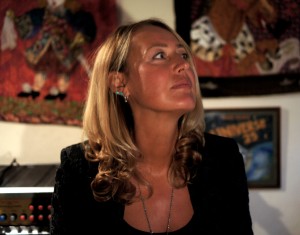 Cover photo for the album

The album Universe 25, described by the band as “songs observing the shortcomings of humanity from an alien perspective”, is officially released on 25 August 2015. 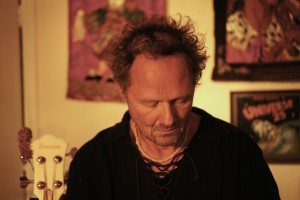